Kat: April 10th, Carole King's A Natural Woman: a Memoir is released. Carole King, for those who don't know, is a woman who's written and co-written some of the best known songs in America popular music. Starting out in the 60s, often with then-husband Gerry Goffin, Carole wrote such classics as "The Locomotion," "One Fine Day," "Pleasant Valley Sunday," "(You Make Me Feel Like) A Natural Woman," "Will You Still Love Me Tomorrow?," "Something Good," "Up On The Roof," "Take Good Care Of My Baby," "Go Away Little Girl," "Don't Bring Me Down," "Cryin' In The Rain," "Chains." Back then, she wrote -- and often produced -- for others like Little Eva, Aretha Franklin, the Drifters, the Everly Brothers and the Shirelles. Back then, she wrote and didn't sing -- with a few exceptions. When ex-boyfriend Neil Sedaka had a hit with "Oh! Carol," she countered with "Oh! Neil."

And in 1962, she had a hit -- as writer and recording artist -- with "It Might As Well Rain Until September" which would make it to number 22 in the US and number 3 in England and which, in the 70s, would pop up on the More American Graffitti soundtrack.

Back then there was no Carole King persona as a singer. Not a surprise, Paul Simon didn't have one back then either. The two had gone to Queen's College and Carole had tutored him in math when he wasn't writing songs or cutting demos -- he and Carole would demo "Just To Be With You." In those days, they and other young writers were just trying to write what they hoped would be the next hit. So there's no real connection between the young woman singing "Oh! Neil" or "It Might As Well Rain Until September" or "He's A Bad Boy." She was a songwriter, a highly gifted one.


Probably she would have been happy writing songs for others. But the Beatles, who recorded "Chains," were reinventing the game throughout the sixties and writing their own hits. Others followed like the Mamas and the Papas. To be a real artist, by the late sixties, in the world of rock meant you either wrote your own songs or you recorded old blues numbers. (Or you passed riffs from old blues numbers off as your own songs.)

So Carole and her song writing contemporaries were suddenly left to try for TV themes and the attention of the increasingly small number of acts who didn't write their own songs. Something had to give and it wasn't just her marriage to Gerry Goffin. And, after marrying Charles Larkey, she'd prove that you could take the girl out of the Bronx as they relocated to California and ended up joining Danny Kortchmar to record Now That Everything's Been Said as the group The City. The City did not take the country. And Carole, now writing with Toni Stern, was at last forced to be a solo act -- something many had long encouraged. In 1970, her first solo album was released, Writer. A strong album, Writer sold better in the years to come than it did upon initial release.

None of that mattered after 1971 when Tapestry was released and Carole King became a best selling and beloved artist, one with an album that would go on to sell over 25 million copies and with singles she'd take onto the charts like "It's Too Late," "I Feel The Earth Move" and "So Far Away." Also on the album? "You've Got A Friend" which she wrote but James Taylor would take to number one, "Smack Water Jack" which Quincy Jones would chart with and, suddenly, everyone was recording Carole: Barbra Streisand with "Where You Lead," Roberta Flack and Donny Hathaway with "You've Got A Friend," the Carpenters with "It's Going To Take Some Time," Donny Osmond with "Go Away Little Girl," Blood, Sweat & Tears with "Hi-De-Ho (That Old Sweet Roll)" . . .

Carole's book should detail that period and what followed, another million selling album and five gold ones in a row. That last one, 1977's Simple Things, sold on her name and left a lot of people with buyer's remorse guaranteeing that it would be harder for future albums to sell. Welcome Home was always going to be a hard sell, an erratic and often confusing mix of songs and styles. But 1979's Touch The Sky was something altogether different -- as you can hear for yourself since Carole's just re-released the album as an MP3 album ($9.49 at Amazon currently) and, for the first time ever in the US, a CD ($8.29 at Amazon currently). 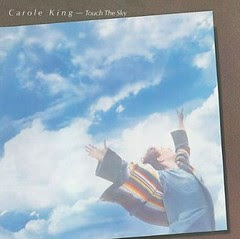 Over the years, Carole's earned an image with some of being chirpy and Pollyanish. That image was refuted with Touch The Sky which found Carole at not only her earthiest but also her most sensual. "Walk Lightly" doesn't always succeed in every way but it was definitely successful in exhibiting a sensual layer that hadn't really been present before (1970's "Can't You Be Real" vocal hinted at this layer). And that track? It's probably the weakest on the album.

That's how strong Touch The Sky is, even the weakest track earns a A-. The album itself is a solid A+ and I'd rank it as the strongest Carole King album of the seventies after Tapestry. Carole plays piano and guitar and jams with Jerry Jeff Walker's band at Pecan Street Studios in Austin, Texas. The band and the studio provide both a new and a cohesive sound for Carole. Lyrically, the album holds together as well. Carole had become a widow the year before and she explores themes of loss and longing throughout the album. Even on the uptempo "Good Mountain People" ("I'm like a child again/ I'm learnin' how to run free"), she's writing of joy in a different way.

"Seeing Red" closes the album and is a haunting number but it's one of three haunting numbers. "You Still Want Her" is heart breaking in a way that Carole's only approached before in "So Far Away" when noting how transitory our society has become. Here, she's singing about a man who can't pull away from the wrong woman:

Those aren't typical Carole lyrics (Carole wrote the lyrics and the music of the song). One has to wonder if the notoriously private Carole King wasn't recasting herself as the man and lamenting Rick Evers' death? Or possibly the song is about Evers and the woman is the heroin he was addicted to? Regardless, it's a raw vocal that, once you hear it, stays with you. Before finding this on Amazon last Wednesday, I only had this on vinyl. I rarely have time to listen to my vinyl collection (I'm rarely home). But even with it being years since I had heard it, I could still hear it in my head as I was downloading (and wanting to hear this song first). "Eagle" is no less personal and just as beautiful.

As we noted at Third Estate Sunday Review in 2009, "It was a very brave and personal statement from a woman recently widowed. And it sailed over the Boys Club as well as over the heads of fans that just wanted to hear 'Smack Water Jack' for the twelfth million time."

Now if you're a Carole King fan who's never heard the album, you're probably thinking, "Okay, I'm ready to download!" No, you're not, not yet. You need to know that the first track is a Carole classic, one that she should have been performing on her live albums of the 90s and 00s. "Time Gone By" is a lyrical and musical marvel, a single that never was but should have been. A song that is also more important today than it was in 1979. (Listen to it, no spoilers, you'll see what I'm talking about.) And maybe today, maybe finally today, Carole King's Touch The Sky can be appreciated as the great album it is.