Al Mada reports today that Ayad Allawi has called for Iraq to fight the "emerging dictatorship" in Iraq today. Iraqiya spokesperson Maysoon al-Damalouji read the statement which called out a return to a culture of suppression and denounced the raid on the Communist Party. The Iraqi Communist Party should have been in the news yesterday and should be in the news today. The fact that it's not is rather sad and rather telling. From yesterday's snapshot:

We'll close by noting the disturbing news of the day and news that wasn't picked up and front paged but should have been. Nouri al-Maliki is now going after Iraq's Communist Party. Al Mada reports that Nouri's security forces stormed the political party's headquarters and arrested 12 people who were arrested and questioned about protests. Ali Hussein (Al Mada) notes the Communist Party has a long history of fighting for Iraq, not against it. Hussein reports that Nouri's tanks have been sent to surround the homes of Communist Party members in Baghdad. Those who paid attention in December will remember that Nouri ordered tanks to circle the homes of Iraqiya members right before he demanded that Deputy Prime Minister Saleh al-Mutlaq be stripped of his posts and ordered the arrest of Vice President Tareq al-Hashemi on charges of terrorism. Both al-Mutlaq and al-Hashemi are members of Iraqiya as well as Sunnis. Ali Hussein notes that Nouri also ordered tanks to circle the homes of Communist Party members last year.

The Iraq Communist Party Tweeted 15 hours ago, "Iraqi Communist Party condemns raid of its newspaper headquarters by security forces." They state that the raid took place late in the evening Monday and that their headquarters were ransacked by federal police who entered claiming that they were doing a sweep of the area for the Arab League Summit. An old weapon ("piece of junk") was on the roof and they used this as a pretext to arrest 12 of the people who were held overnight and only released after they signed documents -- documents they were forced to sign while blindfolded. While they were held, the federal police returned to the now empty headquarters and ransacked the place. The Community Party condemns the attack and notes that the 78th anniversary of the Iraq Communist Party is approaching.


The following community sites -- plus Antiwar.com, Adam Kokesh, Chocolate City and Susan's On The Edge -- updated last night and this morning:

Cedric's Big Mix
If he had an uncle, he would look like Onyango
2 hours ago
The Daily Jot
THIS JUST IN! HE LOOKS LIKE HIS UNCLE!
2 hours ago

We'll close with this from Senator Patty Murray's office (Murray is the Chair of the Senate Veterans Affairs Committee): 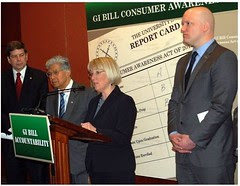 Bill will provide servicemembers and veterans using the Post-9/11 GI Bill and other VA education programs with an ONLINE GUIDE to help them to judge a school’s performance with other veterans, among other resources

(Washington, D.C.) – Today, U.S. Senator Patty Murray, Chairman of the Senate Veterans’ Affairs Committee, joined with Senators Daniel Akaka (D-HI), Mark Begich (D-AK), and Iraq and Afghanistan veterans from across the country to unveil the GI Bill Consumer Awareness Act of 2012. The bill, which was introduced in the Senate today, will give servicemembers and veterans using the GI Bill and other VA education benefits access to information that would help them make informed decisions about the schools they attend so they get the most out of the benefit. This bill would also require that VA and DoD develop a joint policy to curb aggressive recruiting and misleading marketing aimed at servicemembers and veterans using the GI Bill.

“The Post-9/11 GI Bill has offered tremendous opportunity to so many veterans since it was passed in 2008,” said Senator Murray. “But like any benefit, we need to constantly monitor and improve on it to ensure that our veterans are getting the treatment that they deserve. This bill is designed to ensure that our veterans have the facts to make their own decisions and to defend themselves from being taken advantage of. We can’t allow them to get anything less than the full potential of this benefit – because so much is riding on it.”

"I am so proud of today's service members and veterans taking advantage of the Post 9/11 GI Bill benefits they earned - more than half a million this year alone," said Senator Akaka, a beneficiary of the original GI Bill after World War II. "It is disturbing to know that some institutions are using deceptive marketing to try to take advantage of them. That is why I am supporting the GI Bill Consumer Awareness Act of 2012, which will take on manipulative marketing and provide beneficiaries with easy-to-understand information so they can make informed decisions. It is the right thing to do for our veterans and service members who have sacrificed so much for us."

“With the unemployment rate unacceptably high among our nation’s veterans, many of them find themselves without the information to access the skills and education they need to enter the workforce, leaving them susceptible to aggressive recruiting and marketing schemes,” said Senator Begich. “This bill will expand access to information on topics like student debt and veteran enrollment, increase availability to academic advisors, and better coordinate efforts to curb aggressive marketing so that our former servicemen and women do not fall victim to predatory practices. With roughly 10 percent of Alaskans making up the ground forces in Afghanistan, the GI Bill is crucial to their future and their education. Strengthening the original bill with the GI Consumer Awareness Act will provide those who have so honorably served with the tools necessary to make the right decisions for their future.”

“As Chairman, Senator Murray has written a bill that supports, empowers, and protects veterans and service members, and sends a clear message that we must raise the bar to ensure that our brave men and women have access to the basic information and quality education they deserve. By enacting these common-sense and effective policies, Congress can safeguard students and taxpayers from predatory low-quality schools and promote success inside and outside of classrooms,” said Senate HELP Committee Chairman Tom Harkin.

"The New GI Bill is one of the single greatest tools new veterans have to protect against unemployment in this tough economy,” said IAVA Founder and Executive Director Paul Rieckhoff. “IAVA fought hard for its historic passage in 2008, and we applaud Chairman Murray, Senators Akaka and Begich for stepping up to protect it. Every great career starts with a great education. But right now, vets lack clear and consistent information about their education opportunities. Identifying the right school or program is the first crucial step towards getting the best education and training for the job market. The GI Bill Consumer Awareness Act will give vets a head start, so they can apply to the school that’s right for them and take full advantage of the benefits they’ve earned,”

"Today's veterans are being given the opportunity of a lifetime to improve their economic viability through education with the Post 9/11 GI Bill,” said Student Veterans of America Executive Director Mike Dakduk. “In order to most effectively take advantage of this generous benefit, however, we need to make sure that they are provided with the proper information to make informed decisions about their future alma mater, and Student Veterans of America is proud to support this Bill which does just that."

"Senator Murray's bill should help put the brakes on some of the more egregious and unconscionable practices of schools that take advantage of veterans seeking to use the Post-9-11 G. I. Bill to pursue their American Dream," said Vietnam Veterans of America President John Rowan.

“Veterans have earned the right to a quality education, and the VFW believes Chairman Murray’s bill takes critical steps to ensure veterans can make quality choices in how to use their education benefits and that schools can deliver on their promises to educate our nation’s heroes,” said VFW Executive Director Bob Wallace. “When we entrust our service members to make life or death decisions on the battlefield, we take drastic steps to prepare them to make the right decisions. When we ask veterans to choose a school, we must take similar steps to prepare them for what lies ahead.”

The GI Bill Consumer Awareness Act of 2012 complements veterans’ educational assistance programs by requiring VA to provide beneficiaries with easy-to-understand information about schools that are approved for GI Bill use.

· Staffing and Training: The GI Bill Consumer Awareness Act requires educational institutions to have at least one employee who is knowledgeable about benefits available to servicemembers and veterans. This legislation further requires that academic advising, tutoring, career and placement counseling services, and referrals to Vet Centers are available and that institutions offer training to faculty members on matters that are relevant to servicemembers and veterans.

· Curbing Misleading Marketing and Aggressive Recruiting: The GI Bill Consumer Awareness Act requires VA and the Department of Defense to develop a joint policy on aggressive recruiting and misleading marketing aimed at servicemembers, veterans, and other beneficiaries.

Get Updates from Senator Murray