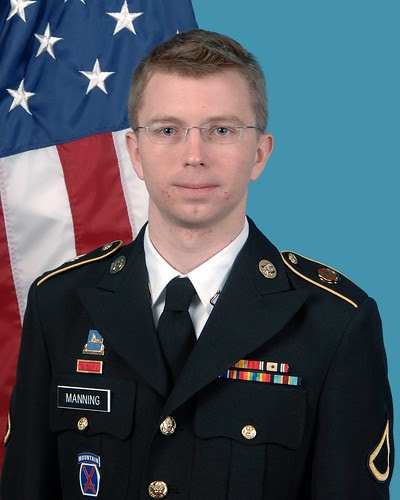 Duncan Roden (Green Left) reports tomorrow will be "the 1000th day in which alleged WikiLeaks whistleblower 24-year-old US Army intelligence officer Bradley Manning, has been jailed by US authorities without trial."


These tears I've cried
I've cried 1000 oceans
And if it seems
I'm floating in the darkness
Well I can't believe that I would keep
Keep you from flying
So I will cry 1000 more
If that's what it takes
To sail you home
Sail you home
-- "1000 Oceans," written by Tori Amos, first appears on her To Venus and Back


Alex Kane (In These Times) notes, "40 cities around the world are set to mark the 1,000th day of WikiLeaks source Bradley Manning’s imprisonment. Manning’s whistleblowing acts will be honored and his imprisonment without a speedy trial denounced this weekend in places ranging from Denver to Rome to Sydney."  These events will take place today (a few), Saturday (most) and Sunday (a few).  BradleyManning.org notes they will be "around the world are planning demonstrations, rallies, and marches on February 23. From California, to Florida, to Italy, to Germany, supporters of PFC Manning will make their protests known."  Here's their list:

Background, Monday April 5, 2010, WikiLeaks released US military video of a July 12, 2007 assault in Iraq. 12 people were killed in the assault including two Reuters journalists Namie Noor-Eldeen and Saeed Chmagh. Monday June 7, 2010, the US military announced that they had arrested Bradley Manning and he stood accused of being the leaker of the video. Leila Fadel (Washington Post) reported in August 2010 that Manning had been charged -- "two charges under the Uniform Code of Military Justice. The first encompasses four counts of violating Army regulations by transferring classified information to his personal computer between November and May and adding unauthorized software to a classified computer system. The second comprises eight counts of violating federal laws governing the handling of classified information." In March, 2011, David S. Cloud (Los Angeles Times) reported that the military has added 22 additional counts to the charges including one that could be seen as "aiding the enemy" which could result in the death penalty if convicted. The Article 32 hearing took place in December. At the start of this year, there was an Article 32 hearing and, February 3rd, it was announced that the government would be moving forward with a court-martial. Bradley has yet to enter a plea and has neither affirmed that he is the leaker nor denied it. The court-martial was supposed to begin before the election but it was postponed until after the election so that Barack wouldn't have to run on a record of his actual actions.


Justin Raimondo (Antiwar.com) offers, "That the authorities went after him with unusual viciousness is hardly surprising. What’s surprising is that he wasn’t murdered in prison, like Ben Zygier. Kept in solitary confinement, stripped of clothing, and subjected to perpetual harassment by prison guards, the conditions of Manning’s imprisonment were so extreme that a UN rapporteur intervened and a letter signed by 295 legal academics raised a hue and cry: he was eventually transferred to Ft. Leavenworth, where he is free to interact with other inmates." Aubrey Bloomfield (Policy Mic) presents this perspective, "Whistleblowers play a vital role in a functioning democracy, striving to hold governments accountable for their actions. Just think of famous cases such as Daniel Ellsberg or Clive Ponting. And yet the Obama administration has already charged six people under the Espionage Act for allegedly leaking, or planning to leak, classified information. This is more than all past presidents combined. Furthermore, Van Buren notes that increasingly the Administration is also resorting to extra-legal means to punish and intimidate whistleblowers."


We'll close with this from the Center for Reproductive Rights:


02.21.13 - (PRESS RELEASE) Today the Arkansas House of Representatives approved an amended version of SB 134, a measure banning all abortions at 12 weeks of pregnancy with only narrow exceptions in cases of rape, incest, lethal fetal anomalies, and to save the woman’s life.

The bill, which would be the earliest and most extreme abortion ban in the country, is now expected to head to Governor Mike Beebe’s desk if the Senate approves the House’s version of the bill.

Nancy Northup, president and CEO at the Center for Reproductive Rights, called on the State Senate and Governor Beebe to reject the bill:

“Let’s call this bill what it is: bumper-sticker message legislation with no chance of standing up in court, designed to dial the clock back 40 years on women’s rights.

“This extreme ban will either force women already facing tough economic circumstances to travel to a neighboring state to access constitutionally-protected health care or to turn to dangerous, clandestine options that could ruin or even end their lives.

“We strongly urge Governor Beebe to veto this archaic bill and send a strong statement to the anti-choice politicians in the Arkansas Legislature that this law is a gross violation of women’s constitutional rights.”

Last year, lawmakers in Ohio failed to pass early bans on abortion based on the detection of fetal heart tones—which can be as early as five or six weeks—after raising concerns about the likely legal battle over the law’s constitutionality. Although similar measures have been introduced already this year in North Dakota and Mississippi, no state has ever passed such a bill.