Protests continue (and continue to be distorted) 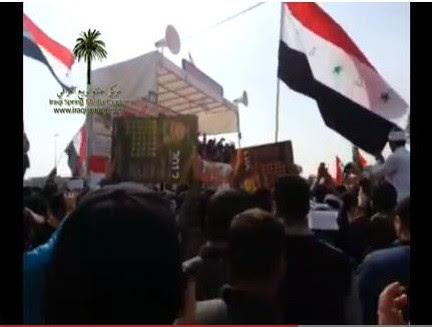 It's Friday, the Iraqi Spring continues.  The above is a screen snap from a video Iraqi Spring MC has posted on the Twitter feed.  Alsumaria reports today is dubbed "Iraq or al-Maliki."  al-Maliki would be Nouri al-Maliki, the prime minister since 2006 when Bully Boy Bush said no to the Parliament's choice of Ibrahaim al-Jaafari.  In 2010, Iraqis said no to to Nouri but he refused to step down and the White House again backed Nouri (though now Barack Obama was president).  To get around the vote and the Iraqi Constitution, the US brokered a contract giving Nouri a second term in exchange for Nouri agreeing to various demands from the political blocs signing off on the contract.  Nouri used The Erbil Agreement to grab a second term and then refused to honor his written promises within the contract.  Alsumaria notes that thousands of demonstrators turned out in Kirkuk and Hawija.  Mohammed al-Jubouri tells Alsumaria that over 15,000 took to the streets in Hawija for "legal, civil and peaceful demonstrations as guaranteed in the Constitution."  One sermon delivered in Ramadi by Sheikh Abdel Moneym Badrani called for the government to cease the stalling and procrastination and respond to the demands of the protesters.    Iraqi Spring MC posts a video of an Iman in Duluiya this morning delivering a sermon about how Iraq is bleeding internally and the country needs attention -- which is why the people are protesting.

What are they calling for?  Workers World offered this list last month:


The protesters are justly demanding:
1. The immediate release of detained protesters and dissident prisoners.
2 . A stop to the death penalty.
3. The approval of an amnesty law for innocent detainees.
4. The abolition of anti-terrorism laws (especially Clause 4 used to target them).
5. The repeal of unfair rulings against dissidents.
6. Fair opportunities for work based on professionalism.
7.The end of the use of all military command based on geographic areas.
8. The provision of essential services to all areas in Iraq neglected by the state.
9. The holding of all … governmental officials, army or security units who have committed crimes against dissidents accountable, especially those who have violated the honor of women in prisons.
10. A U.N.-sponsored population count.
11. An end to marginalization, a stop to agitating divisions between ethnic and religious groups, and a stop to the house raids without legal warrant based on the information of secret informers.
12. A stop to financial, administrative and legal corruption.
13. The combating of sectarianism in all its forms by returning religious buildings and all religious properties to their rightful owners, and the abolishment of law No. 19 of 2005.
The International Occupation Network (IAON) welcomes the spread of these non-sectarian protests and supports the efforts of the Iraqi people to regain their full independence and national sovereignty. Ten years of foreign occupation is enough! Ten years of massive human rights violations is enough! Ten years of corruption and depriving the whole population of basic services is enough!
— The International Anti-Occupation Network / IAON

Al Jazeera, the Christian Science Monitor and PRI's Jane Arraf continues to be one of the few Western reporters to cover the protests.  She Tweets the following today:

And Jane Arraf has a video report at Al Jazeera: where she notes that "this one was really quite interesting.  These pictures that we're seeing from Ramadi where the cleric called on Turkey to embrace the Sunni population here saying that they had ruled the Arab world before, they had pushed back Iran before, and it was time for them to step in.  Now that is, of course, what the Iraqi government has been worried about and what the Iraqi government has been saying, that there's foreign influence and foreign intervention here."

No, Jane Arraf, if a cleric is asking for it to happen, then that's disproves what Nouri's been saying.

Nouri al-Maliki hasn't claimed that Turkey or another country would be asked to help, he has claimed that foreign governments are behind the protests.

I can't believe the mistake she made.  But it's in keeping with the crap from Al Jazeera of late.  We can explore those scandals.  I've focused on other things.  But a cleric making a plea for Turkey to help is not the same as Turkey being behind the protests.

And Jane Arraf knows damn well that Nouri has been accusing Saudi Arabia and Jordan first and foremost.

At the April 8, 2008 Senate Armed Services hearing then-top US commander in Iraq Gen David Petraeus explained that  "there are now over 91,000 Sons of Iraq -- Shia as well as Sunni -- under contract to help Coalition and Iraqi Forces protect their neighborhoods and secure infrastructure and roads. These volunteers have contributed significantly in various areas, and the savings in vehicles not lost because of reduced violence -- not to mention the priceless lives saved -- have far outweighed the cost of their monthly contracts."   World Bulletin notes, "On February 2, a suicide bomber targeted Sahva forces 20 kilometers away from capital Baghdad and 19 of them were killed, 40 wounded."