In Iraq, the protests continue and in the Iraqi Spring MC video above, it's noted that judges and attorneys in Anbar Province were on strike today in support of the protesters.


As noted yesterday,  "Alsumaria reports Nineveh Province Governor Atheel al-Nujaifi is accusing the security forces of terrorizing preachers and religious scholars.  Al Mada adds that the Tigris Operation Command has been interrogating them and tribal leaders, warning them of arrests should they continue to participate in the ongoing rallies that have been going on in Iraq for sixty days now.  The Tigris Operation Command are also now following protesters after protests to their homes in an effort to intimidate them."  The show of support in Anbar Province is especially encouraging in the face of efforts to peel off support for the protesters. 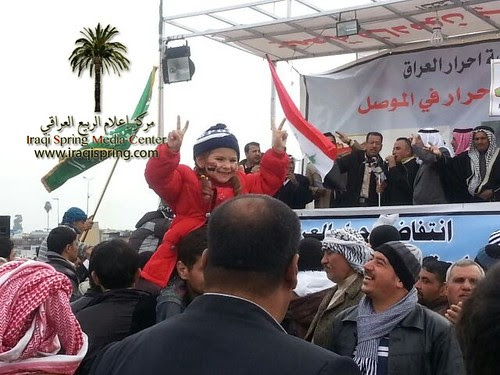 
The Iraqi Spring is what the protesters are calling the three months of protests that began in December and continue today.  There are marches, sit-ins and rallies.  There are also strikes.

And another strike is taking place that's unrelated to the Iraqi Spring -- at least for now. The Iraq Times notes that Southern Oil Company workers in Basra have been carrying banners and chanting slogans as they protest Southern Oil Company's management and journalists are being ordered not to cover the story while protesters are being followed by police.  Alsumaria adds there have been earlier demonstrations but the current one has been going on since last week  and that the workers are calling for monies owed them since 2010 (365 billion dinars), for the training, health care for workers suffering from the uranium contamination in the oil fields due to the war,  and development program to be reactivated and for the company to do as it promised and build houses on land the government gave them several years ago.  They also note that unidentified "civilians" are trying to prevent coverage and asking the police to instruct reporters that they are not allowed to cover the protests.

Second thing that should raise eyebrows?  The uraninum contamination. Though the article doesn't go into it, other reports have detailed some of what is happening.  Last December, Alexander Smoltcyk (Der Spiegel) reported on the Basra birth defects:

It sounds at first as if the old man were drunk. Or perhaps as though he had been reading Greek myths. But Askar Bin Said doesn't read anything, especially not books, and there is no alcohol in Basra. In fact, he says, he saw the creatures he describes with his own eyes: "Some had only one eye in the forehead. Or two heads. One had a tail like a skinned lamb. Another one looked like a perfectly normal child, but with a monkey's face. Or the girl whose legs had grown together, half fish, half human."The babies Askar Bin Said describes were brought to him. He washed them and wrapped them in shrouds, and then he buried them in the dry soil, littered with bits of plastic and can lids, of his own cemetery, which has been in his family for five generations. It's a cemetery only for children. Though they are small, the graves are crowded so tightly together that they are almost on top of one another. They look as if someone had overturned toy wheelbarrows full of cement and then scratched the names and dates of death into it before it hardened. In many cases, there isn't even room for the birth date. But it doesn't really matter, because in most cases the two dates are the same.
There are several thousand graves in the cemetery, and another five to 10 are added every day. The large number of graves is certainly conspicuous, says Bin Said. But, he adds, there "really isn't an explanation" for why there are so many dead and deformed newborn babies in Basra.
Others, though, do have an idea why. According to a study published in September in the Bulletin of Environmental Contamination and Toxicology, a professional journal based in the southwestern German city of Heidelberg, there was a sevenfold increase in the number of birth defects in Basra between 1994 and 2003. Of 1,000 live births, 23 had birth defects.

US Labor Against the War carries the statement the workers released last Wednesday:

"Let us unite to defend our rights, and cripple the corrupt at the Southern Oil Company

Dear brothers, you all realize that our struggle with company management is significant, and you have seen how it confronts us at any time we raise our voices to demand our rights, it does that with procrastination and punishments.
You have participated in previous protests and achieved part of your demands, but unfortunately the company management always goes back to its usual trend and denies those rights.
We at the Oil workers' rights defense committee, in which most Oil workers are represented, have decided to organize a worker's demonstration on Wednesday the 13th February, 2013 at 9 am before the Southern Oil Company HQ office, to resume our re-stress our demands, we call everyone to focus on the essential demands and not bring up partial demands that do not represent the oil workers' rights.
The committee also announces that this demonstration has nothing to do with other demonstrations that are taking place in other parts of Iraq, and we warn the politicians not to use it for their political agendas.

The demonstration is to protest against corruption, and to demand our following rights:
1- To pay the accumulated interests since 2010 that are equal to 365 Billion Iraqi Dinar. We are concerned that with this prevailing corruption, those interests will be misused.
2-  Demanding the construction of houses on the pieces land (at Al Toba and Al Nakhaila districts) that were distributed to workers 8 years ago, and to be built by Investment companies,  without charging the workers any down payments. We also demand the distribution of pieces of land at Al Tannuma district to the eligible company employees.
3- Demanding an immediate cancellation all resolutions that restrict union work and to  issue a fair labor legislation.
4- To provide medical treatment to workers at the oil field, that were battle fields at some time and that are polluted with radioactive uranium, especially South and North Rumaila fields, in special hospitals. And cover all medical charges by the foreign companies. And to conduct regular inspections on those hospitals.
5- To ban announcing the special hospital of oil workers to private investment, and to limit its services specifically to oil workers and their families, just as the goal was when this hospital was first opened.
6- Raising the maximum ceiling level of the financial bonus to oil workers in general, from 1 Million up to 4 Million Iraqi Dinars.
7- To process the promotions of work category scales (that has been frozen on fourth level/ stage 11) for the last 6 years.
8- To reveal the details of the new bonus that has been recently approved by the Ministry of Oil, and to announce the equation in which its calculated.
9- To re-activate the overtime shift allowances, and those for the official holidays and hazard, that were considered, previously.
10- To activate the training and development unit through including the company's staff in workshops and training program, especially the ones that are relevant to their job title, also to recognize the workshops that are conducted at field sites. "


All Iraq News adds that MP Susan Saad, in her capactiy as a member of Parliaments Oil and Energy Committee, states that she will form a committee to investigate this and called on the oil company to honor their promises with an emphasis in her statement on the money owed to the workers.