Violence and confusion continue in Iraq


Through Sunday, Iraq Body Count counts 233 people killed from violence in Iraq so far this month. All Iraq News notes 4 bombs today in Mahmoudiya (no reported injuries or deaths),  1 person shot dead in Baghdad, and a northwest Baghdad bombing has left three people injured.  Alsumaria reports that 1 military officer, his wife and their son were shot dead on the streets of Mosul., and a Kirkuk attack late Monday night using bombs and rockets left two people injured.

As messy as the ongoing violence is the political situation.  Last week, the President of the Federal Court, Medhat al-Mahmoud, was judged a Ba'athist and removed from office and Nouri named a successor.  Today Alsumaria is reporting that the decree of Ba'athist has been revoked by a panel according to the Justice and Accountability's Deputy Chair Bakhtiar Omar al-Qadhi.  Kitabat reports that Nouri pressured the committee to overturn the decision.    The Iraq Times notes that al-Mahmoud was given 25,000 squre meters of land by Nouri who cited the judge's efforts of government service when making the gift (on behalf of the Iraqi people -- it was their land, not Nouri's).  The article also notes that al-Mahmoud was originally selected for his postion by Paul Bremer who was the Bwana or viceroy over Iraq in the initial stages of the war.  All Iraq News quotes a statement that Nouri issued declaring that the Justice and Accountability Commission has no documents backing up the accusation that al-Mahmoud is Ba'athist.

If you can follow the back-and-forth of 'He's a Ba'athist/No, he's not' decrees, let's move into the issue of the body itself.  The head of the Justice and Accountability Commission was Falah Shanshal.  Then Nouri fired him at the start of the week.   As Wael Grace (Al Mada) reports, Speaker of Parliament Osama al-Nujaifi has made him the head of the commission again and stated that Nouri didn't have the power to fire him (and replace him with a member of Dawa -- Nouri's political party).   All Iraq News reports that other members of the commission are blocking Shanshal from assuming his position as head of the Committee.  Can you follow the various developments regarding the Justice and Accountability Commission?  All Iraq News offers this back and forth of various people making claims and counter-claims.  On the issue of 'justice,' Alsumaria reports Iraqiya MP Haider Mulla is decrying the fact that arrest warrants are being issued by State of Law MPs and not by judges -- he states this backs up claims that the judiciary has been politicized. 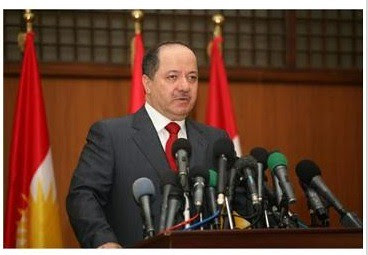 Some have wondered if, in the absence of Iraqi President Jalal Talabani (in Germany, recovering from a stroke), Kurdistan Regional Government President Massoud Barzani (above) isn't stepping into the slot of Kurdish power broker?   All Iraq News reports he is heading a delegation that's visiting Russia this week.  They note that while in Russia he will meet with various officials including President Vladimir Putin.  And the KRG issued the following:

During the visit, President Barzani is expected to meet senior Russian officials to discuss a number of important matters, including relations between the Kurdistan Region and the Russian Federation, political developments in Iraq, and the greater region in general.

Meanwhile on the KRG, the Iraq Times reports there is a meet-up planned in Erbil shortly and Nouri al-Maliki is not invited according to MP Mahmoud Othman of the Kurdistan Alliance who states that the meet-up was requested by the European Union and the US government.  In response, All Iraq News notes, Nouri's invited  KRG Prime Minister Nechervan Barzani to Baghdad to discuss the oil and gas issues.  (Nechervan Barzani's uncle is KRG President Massoud Barzani.)