Violence continued in Iraq today.  Among the targeted were politicians.  AFP reports, "The suicide bomber detonated an explosives-laden vehicle at Governor Omar Al-Humairi’s house in Baquba, the capital of Diyala province, wounding him, killing two of his guards and injuring six more, a police lieutenant colonel and a doctor said." And they note a Babil Province car bombing claimed the life of Shekih Hassan Hadi al-Janabi who was a candidate in the provincial elections which are supposed to take palce in April.  All Iraq News reports on al-Humairi's press conference where he declared, "My bodyguards opened fire targeting the suicide bomber to prevent his advance.  After detonating the car, gunmen carrying silenced handguns attempted to storm my house, but the bodyguards clashed with them. The gunmen fled to unknown destination after they failed in storming my house."  Al Mada adds that he explained he wasn't at home at the time of the attack and that 1 female family member was killed in the explosion.

Iraq Body Count counts 293 violent deaths in Iraq so far this month -- and there are still a few days left.

Yesterday, Iraq saw massive demonstrations in the ongoing protets with participants number over 3 million -- especially amazing in a country where that would make an estimated 10% of the population.   Note the photo below. 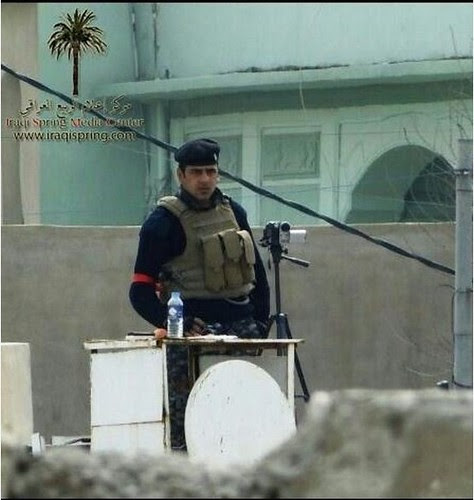 Nouri's forces are taping the protesters.  This happened in 2011 as well.  And then the protesters began to be targeted not at the protests, but at their homes.  The photo is from Iraqi Spring Media Center.  Zarzis Thomas (Al Mada) reports on Mosul's protest yesterday where things were so ugly that Governor Atheel al-Nujaifi went down to ask what was going on. Protesters reported that they were being arrested and harassed.  al-Nujaifi took down the names of protesters said to have been arrested.  When he was leave, the governor reports that federal police (they are controlled by Nouri al-Maliki) attempted to attack his car and his security detail in an attempt to get them to fire guns.  He states the federal police deliberately attempted to create a crisis, deliberately attempted an attack on a sitting governor. In addition, Tigris Operation Command (Nouri's force) -- specifically Brigades 46 and 47 -- continue to do house raids in the area.  Nouri and his forces are out of control.  National Iraqi News Agency quotes Iraqiya MP reading a statement about events in Mosul today, "The Third Army Division in Mosul has shut down the Square protest and blocked access in and out and cut the power, prevented the media from covering the events, and the purpose of this measure is an attempt to get the protesters out of their peaceful protest ."

At some point, the White House is going to have to answer for this.  The way they're going, they would've backed the thugs who did the slaughter inTiananment Square (1989, Chinese demonstrators were slaughtered for peacefully demonstrating in Beijing).  If you're not getting how violence is Nouri's response to Constitutionally protected free speech, NINA reports he declared today that he will ask the judiciary to condemn (that would be a death sentence) "anyone who talks in sectarianism."

A candidate for the provincial elections died today.  What's the status on those elections? They really should have already taken place.  But they got pushed back to early April and now to April 20th. So they'll take place then, right?  Oops.  State of Law says "maybe."  All Iraq News reports that State of Law MP Ammar al-Shibli is stating that they might be postponed -- blaming violence and the Kurds if that happens.  Meanwhile National Iraq News Agency reports there is an ongoing discussion about electronic voting in the provincial elections.  NINA also notes that National Alliance leader Ibrahim al-Jafaari is calling for a strong turn out in the provincial elections and for the voters to replace those politicians who did not achieve.

In other news, Alsumaria reports that Khudair Khuzaie spoke to the press today to note that he had visited Iraqi President Jalal Talabani in his German hospital and Talabani was recovering. This follows Alsumaria's report yesterday that one of the doctors treating Iraqi President Jalal Talabani has issued a statement that Talabani's recovering and that he's experienced major progress and will be able to return to Iraq to perform his duties.  National Iraqi News Agency identified the doctor as Dr. Najmoldeen Kareem.  As with Alsumaria, no specific time for a return is given, nor is any estimate offered.  Jalal has been out of the country seeking treatment in Germany for months now.   Late on December 17th (see the December 18th snapshot), Jalal Talabani had a stroke and was admitted to Baghdad's Medical Center Hospital.    Thursday, December 20th, he was moved to Germany.  He remains in Germany currently. [Saad Abedine (CNN) reported talk that it was a stroke the day the news broke (December 18th) and January 9th, the Office of President Talabani confirmed it had been a stroke.]  Isabel Coles and Nick Macfie (Reuters) report Kirkuk Governor Najmaldin Karim states, "I am in continuous contact with the German team treating President Talabani.  He can talk now with the people around him and started to think in a good way."


In yesterday's snapshot, we noted, "The leader of the Green Party of England and Wales is Australian-born Natalie Bennett who is a journalist, holds a degree in agricultural science (University of Sydney) and whose accomplishments include 'the founder of the blog Carnival of Feminists.'  In addition to founding The Carnival of Feminists,  Bennett's blog is Philobiblon.  The Green Party is holding their national conference and Natalie Bennett addressed the conference today noting that it was the 40th anniversary of the Green Party of England and Wales."  We excerpted the Iraq part.  If we'd had more room, we would have included more.  We'll do so today.  You can stream the two videos or read the speech after the videos (or do both).