A tale of two Huffingtons?


The US, UK, Australia and others invaded Iraq in March 2003.  While England has had multiple public inquiries into the Iraq War -- on intel, on legality, on what was done over there, etc -- the US hasn't had one.  Wonder why that is? 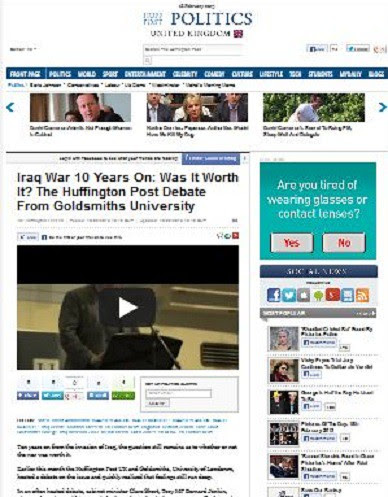 At Huffington Post UK, they're looking at Iraq and the effects of the war while at the US version the concern is navel gazing. 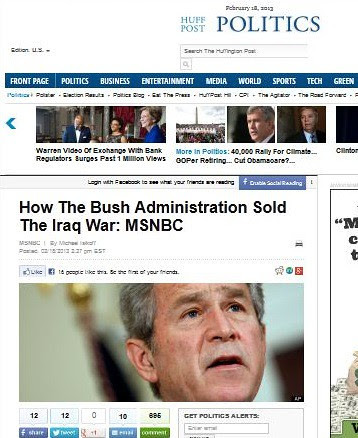 I'm going to assume anyone who drinks it long ago had their morning coffee, but still, sit down.

Bully Boy Bush lied the nation into the Iraq War.

Are you okay?  Do we need a medic?

I know that''s a shocker and it never occurred to you because no one has ever made that statement before, right?


Huffington Post (US) and The Nation are all about pimping War Hawk Rachel Maddow's bad TV special -- billed as a 'documentary' -- and it is to documentaries what Dateline is to news magazines.

The special's also being pimped by Michael Isikoff and why not?  If you co-wrote a (brief) best seller nearly six years ago and the special was using it as the primary text and even keeping the name. you'd most likely be marketing your book too.  Think of the p.r. possibilities!  If only they can get some McNuggett tie-in as well! --  you'd probably be pimping the special too.

(In fairness, _____ wrote a brilliant book on a related topic.  When it was turned into a bad movie, he didn't jump on the bandwagon and largely avoided discussing the movie.  Not everyone whores.  I won't embarrass him by naming him -- and he would be embarrassed because he's not an ego maniac -- but not everyone whores.)

Most people already know that Colin Powell has repeatedly saved his own ass by cozying up to the press.  No one feeds them better than Colin and so grateful are the hungry press masses to swallow his bone soup that they ensure he whethers each and every scandal.  They did the same for Henry Kissinger but even they can't protect Kissinger now, Colin take note. 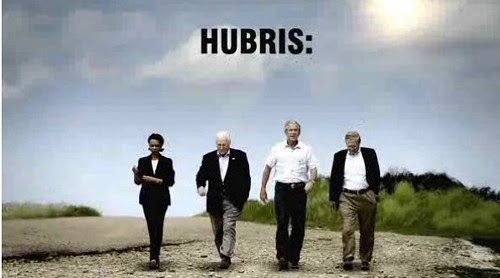 The photo above is right off the book Hubris but it's used in the special.  Which major US war criminal is missing?  Collie Powell.  The lovable Collie, the frisky Collie, scratch behind his ears and watch his leg thump.  His devoted (love slavish?) Lawrence Wilkerson yet again tries to rescue Collie.  (Doesn't the relationship disgust Alma Powell? You'd think it would.  But then again, if you bed a War Criminal knowingly and repeatedly, I guess you don't have any higher ground to scramble to.)

So Wilkerson gives access -- no one gives access like Wilkerson, they say -- and the result is that Powell is even less guilty than he was in Hubris the book.

Colin's so brave and so honorable and look what those mean, mean boys and girls made this grown man do!  Colin chose to sell the illegal war, chose to lie about it.  But Colin's now endorsed Barack Obama twice.  Don't think that doesn't count in the sick of land of MSNBC prime time.

Watching the garbage, I couldn't help but think of what it could have been.

Dr. Martin Luther King Jr.:  We took the initiative to enlarge the war on land, on the sea, and in the air. We are strong enough to take the initiative to end it. I am not absolving Hanoi nor the Viet Cong of their responsibilities, nor do I condone certain rigid attitudes. I am not naive enough, however, to think that they will come to a conference table while clouds of bombs are driving them into bomb shelters. As an American my duty is to speak to my government. Even if my philosophy is not welcomed in an other country, I must constantly strive to make it welcomed in Washington.

MLK was speaking April 15, 1967 in NYC at the Mobilization to End the War in Vietnam.  Click here for the full text.  You can hear some of it in An Introduction To The Enemy, the documentary film Jane Fonda made with director Haskell Wexler and with Tom Hayden.  (Click here for a video of Haskell Wexler discussing his films and the politics around them.)

The Pacifica Radio Archives has an interview, conducted by Paul McIsaac,  with Jane about the documentary.


Jane Fonda:  Well Tom and I felt -- and Haskell Wexler -- and the other people in the organization, the Indochina Peace Campaign, we all share the feeling that it's becoming possible now, even though the war continues in South Vietnam, but it is becoming possible to start to deal with the Vietnamese as people.  It wasn't so easy when there were American troops there, POWs there, but now these people who have been viewed as victims or the enemy for so long must begin to be addressed as human beings.  They are very eager to open up human relations with American people.

In contrast, Hubris celebrates xenophobia.  What has happened to the Iraqis?  Who cares? MSNBC doesn't.  The Iraq War was a tragedy -- for all from the countries who participated but most of all for the Iraqi people.

Hubris is xenophobia, it's reducing the people whose lives were most effected to bit players in order to navel gaze and celebrity watch.  It's as offensive as the initial war coverage was.

Remember the criticism?  We see the missiles launch but we don't see the targets hit.

That is Hubris.  And it's also hubris.

It is not about the Iraq War.

You can't do a documentary on the Iraq War without including the Iraqi people.

Hubris is full of hubris.

It will allow War Hawks who still support the Iraq War to insist that the special avoided showing the effects on the Iraqi people because they have democracy now and they have freedom and they're all happy and wonderful.

And that argument could take hold.

It's a pack of lies but it could take hold because most US media doesn't acknowledge Iraq.  60 days of ongoing protests today but most media in the US hasn't bothered to tell you that.  A corrupt government that is among the lowest rated countries on Transparency International's transparency rankings.  But most don't bother to tell you that.

The whole point of Hubris is: BUSH BAD. BUSH LIED.

Yeah, but I don't believe he would have left office in disgrace if most Americans didn't agree with that message.  (The rank xenophobia of the special guarantees that it will have a very limited international audience.)  And, yes, it is important to repeat that he lied.

But an entire special?

Is Rachel so stupid that she believes Bully Boy Bush (and Colin Powell, and Dick Cheney, and Condi Rice . . .) launched the first set of lies to a country about war?

Again from the 1974 Pacifia Radio interview.

Jane Fonda:  The whole justification for the war was 'well there's two countries, North Vietnam and South Vietnam. And the North Vietnamese have invaded the South.'  And what we tried to point out by interviewing members of families who lived just north of the DMZ and other relatives just south is that it is one country.  It was a barrier that was imposed by foreigners, maintained by the United States and it makes the Vietnamese suffer a great deal.  -- Yeah -- As the last person says in the film, I want to live to see the day that our country can be reunified.


See, the lies are a point, an aspect, of a film.  Ten years later, while you refuse to cover the Iraqi people, to obsess over your own country's lie?

The lie isn't the focus at this point.  Bully Boy Bush got away with it.  If you wanted to make it relevant, you'd apply it to the Iraqi people today.  For the lie to matter, you have to show the impact the lie had and continues to have.

But, if you're xenophobic, and wanted the special to matter in terms of the US, you'd  explore how the lies have been aided and abetted by Barack Obama -- both as a Senator and now as a President. Call it The Destruction of the Constitution.   But, of course, such a special wouldn't air on MSNBC.

The tragedy of Iraq will not be explored because it's more important that Rachel get her anti-Bush on.  She was anti-Bush -- as she is anti- any Republican.  And isn't that what MSNBC has become?  A party outlet masquerading as a news channel?

(I'm referring to prime time programming before anyone working for MSNBC daytime -- I'm thinking of two people -- pick up the phone and call to complain about that staement.)

The MSNBC special wants to make you rage with hate over Bully Boy Bush.  Bully Boy Bush is frozen in history and drumming up hate for him at this point is little more than a distraction.  The Bully Boy rarely ventures out in public and knows travel throughout the world is now limited.  The War Criminal is caged as much as leaders ever get punished.  Obsessing over  Bully Boy Bush seems rather silly.  (I didn't vote for Barack, but I was thrilled when Bush left the White House.  I will also be thrilled when Barack leaves.)  But that's all the special does which is why serious journalists see it as little more than another distraction for the current administration by MSNBC.


Again, England's had multiple public inquires -- even ones that, hard for MSNBC to believe, featured Iraqis offering testimony.  But they're able to do that because they're focused on something more than partisan grudges.