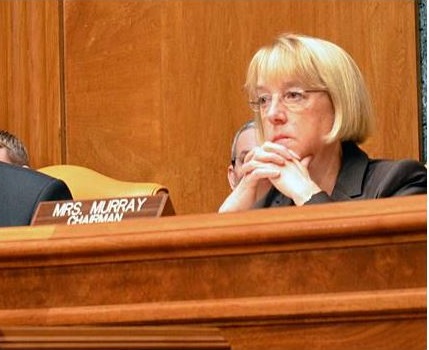 Led by Senator Murray, the Stopping Executive Overreach on Military Appropriations Act comes on the heels of Senate Democrats’ efforts to put a necessary check on President Trump’s massive executive overreach that undermines national security and the rule of law
Also sponsored by Senators Schumer, Durbin, Leahy, and Schatz, the bill would prohibit the use of defense money to build President Trump’s vanity border wall, and would return the $3.6 billion that he has already stolen back to the military construction projects for which they were originally appropriated
In response to Trump’s phony national emergency declaration to circumvent Congress, the bill would require Congressional approval before the president could repurpose military construction funding
ICYMI: Senator Murray blasts “egregious abuse of power” as President Trump diverts money from vital national security projects to fund wasteful border wall
Senator Murray: “The President’s decision to use a phony emergency declaration to take money away from our servicemembers and their families is a gross abuse of executive power that hurts military families in my state and others, and puts our nation’s security at risk”

(Washington, D.C.)  – Today, U.S. Senator Patty Murray (D-WA), a senior member of the Senate Appropriations Committee, including the subcommittee with purview over military construction spending, along with Senators Chuck Schumer (D-NY), Dick Durbin (D-IL), Patrick Leahy (D-VT), and Brian Schatz (D-HI), announced the Stopping Executive Overreach on Military Appropriations Act (SEOMA) in response to President Trump’s raid of military construction funds in order to build his wasteful wall on the southern U.S. border. The bill would rescind President Trump’s egregious abuse of executive power and prevent future presidents from exercising similar executive overreach in the event of a declaration of a national emergency.

“The President’s decision to use a phony emergency declaration to take money away from our servicemembers and their families is a gross abuse of executive power that hurts military families in my state and others, and puts our nation’s security at risk,” said Senator Murray. “We’re taking action to not only reverse President Trump’s reckless decision to ransack funds for critical military priorities and infrastructure projects that help keep our country safe, such as the pier and maintenance facility at Naval Base Kitsap in my home state of Washington, but also to make sure no President going forward can take reckless, harmful steps like this one.”

Specifically, the legislation would directly address President Trump’s egregious abuse of executive power—and set a standard to prevent future abuses of executive power—by:
Senator Murray has been a vocal opponent of President Trump’s repeated attempts to use federal taxpayer dollars to fund his border wall, introducing a bill in February to prevent the president from taking future action to raid federal coffers to fund his border wall, and repeatedly condemning his most recent move to ransack military construction project funding. Following President Trump’s sham emergency declaration at the southern border in February, Secretary of Defense Mark Esper announced that $3.6 billion dollars of appropriated military construction funds would be diverted to pay for the President’s border wall. This decision affects 127 military construction projects in 26 states and territories, including a nearly $89 million project to construct a critical pier and maintenance facility at Naval Base Kitsap in Washington state, and comes after Congress opted repeatedly, on a bipartisan basis, not to fund President Trump’s request for his border wall.

Text of the legislation can be found HERE.

A fact sheet on the bill can be found HERE.
###