Kat's Korner: Ann Wilson sings of and for the boys

Kat:  IMMORTAL.  That's the title of Ann Wilson's second solo album -- second one.  You might say she's 'heartless' on this one. 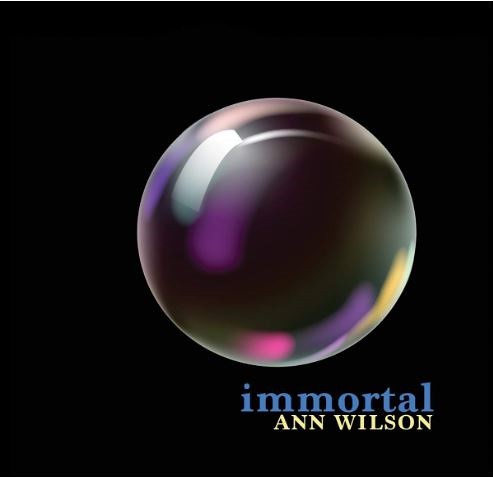 That would certainly be the term for her cover of "Life In The Fast Lane."  It's a huge clunker -- not as bad as Barbra Streisand doing John Lennon's "Mother" or Barbra doing David Bowie's ''Life On Mars," but it's a clunker none the less.

The premise of IMMORTAL is that Ann's honoring some who have passed.  And she does with "You Don't Own Me."  That's to honor the original singer Lesley Gore -- though I do wonder how much Lesley is being honored by interviews where Ann talks about Lesley singing about her boyfriend?  I mean, we all know Lesley was gay.  By the time Allison Anders' GRACE OF MY HEART came out (with Bridget Fonda playing the Gore-like character and performing the Lesley Gore written "My Secret Love") in 1995, I thought people had grasped this.  By the time Lesley herself came out ten years later, I knew people had.  It's weird to catch Ann in her interviews being all let-it-hang-out and we need to speak for ourselves and we need to marry who we want to marry while at the same time repeatedly portraying Lesley Gore as straight.

It's also weird to catch her apologizing basically for not including Aretha Franklin on the album.  Aretha, she explains over and over, hadn't died before they finished recording.

But, you know what, Prince had died before this album was completed.

If you're going to talk rock deaths, where's Prince on the album?

I'd love to hear Ann turn out a blistering cover of "I Could Never Take The Place Of Your Man" or "Another Hole In Your Head" or "Soft and Wet."  But it is not to be because Ann doesn't remember him.

It's a hodge podge album.

If she was going to do a cover album again, she needed a better concept than these-people-have-all-dropped-dead.

And while her cover of "You Don't Own Me'' demands that it be on this album, her cover of "Luna" really doesn't.  It just drives home that Tom Petty was Tom Petty and that no one, except maybe Stevie Nicks, can do justice to his songwriting.   Her Amy Winehouse cover ("Back To Black") is much better than "Luna."

And with that song and "You Don't Own Me" really being the strong ones on the album and all her talk about Aretha in interview after interview for this album, I had to wonder why she didn't do an all female cover album?

She does know -- maybe she doesn't? -- that Aretha did that, right?  That was Aretha's final studio album during her lifetime.  2014's ARETHA FRANKLIN SINGS THE GREAT DIVA CLASSICS.  Every Jill, Judd and Judy do albums celebrating men.  In fact, Judy Collins has done JUDY SINGS DYLAN . . . JUST LIKE A WOMAN, JUDY COLLINS SINGS LEONARD COHEN: DEMOCRACY, JUDY COLLINS SINGS LENNON AND MCCARTNEY AND A LOVE LETTER TO SONDHEIM.


None of those boys ever wrote a song Judy had a top ten hit with.  In fact, the only top ten hit Judy ever had was with Joni Mitchell's "Both Sides Now."  But Judy has never done an album of Joni songs.  In fact, she's lied about Joni repeatedly because Judy's got wet brain and has always been a bit of a liar.

She was hoping that Joni was going to die and thought she could get away with lying so she lied to David Yaffe about Joni and Yaffe was such an idiot that he not only believed her, he went around repeating Judy's lies as facts.  As usual, it fell to truth tellers Ava and C.I. to set the record right.  Yes, Judy did say she'd take Joni to Newport and, yes, she then didn't do it.  And you don't have to be Yaffe the Fool to think it's one woman's word against another.  As Ava and C.I. pointed out, there's is the public record on this that has remained the same since the 60s.  But more to the point, Ava and C.I. pointed out, Joni didn't call Judy.  Al Cooper took Joni back to his apartment, called Judy and got Joni to play songs over the phone for Joni.  Al Cooper remains a witness to what went down and it is that Judy praised Joni's songwriting, said she was taking her to Newport, said she'd pick her up the next day and then didn't.  Tom Rush is a living, breathing witness to those events.

Judy Collin is a piece of work who used her latest autobiography to trash Joan Baez and assorted other women.  (See Ava and C.I.'s now infamours "Trapped in an A.A. Meeting With Judy Collins.")

Is she going to be the only woman who does?

Ann should have done that this go round.  A heavy, guitar inspired cover of Joni Mitchell's "Coyote," maybe a stripped down version of Tori Amos' "Pretty Good Year," Laura Nyro's "Once It Was Alright (Farmer Joe)," an acoustic guitar version of Sarah McLachlan's "Do What You Have To Do," maybe a hair metal version of Janet Jackson's "If," Stevie Nick's "If Anyone Falls In Love," Christine McVie's "Honey Hi" (from Fleetwood Mac's TUSK), maybe a piano-based cover of Pat Benatar's "Treat Me Right," Ann tearing into Carly Simon's "Haven't Got Time For The Pain," Janis Ian's "Jesse" and Tracy Chapman's "Sing For The Things."  That's eleven tracks, eleven songs she could work wonders with.  Possibly close with the Pretenders "2000 Miles"?

If she wants to honor Aretha, stepping up to celebrate other women with an album would be a solid way to do that.  Her first solo album had two songs written by women ("We Gotta Get Out Of This Place" written by Barry Mann and Cynthia Weil and "Jackson" written and sung by Lucinda Williams) this time it's one song written by a woman ("Back To Black").  This isn't progress, Ann.

For now, we're left with IMMORTAL.  It's not a bad album.  I like it.  I could see it making top ten lists for 2018 because of the quality of Ann's singing.  I just wish it worked more as an album.  "You Don't Own Me" and "Back To Black" are solid.  Her take on George Michael's "A Different Corner" is worth buying the album all by itself.  But a hodge podge collection of covers doesn't work this go round.  Maybe it's the production?  Maybe it would have worked better as a live album?

As it is, it feels like IMMORTAL is trying to be a Heart album and it's not cutting it as that.  I'd love a new Heart album.  But this is to Heart what Katrina and the Waves is to the Pretenders.