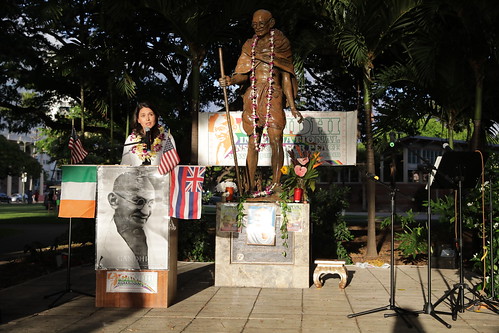 Honolulu, HI—Rep. Tulsi Gabbard (HI-02) yesterday spoke at the 13th Annual Mahatma Gandhi Day at the Gandhi statue in Kapiolani Park on O'ahu. The event, hosted by the Gandhi International Institute for Peace, focused on bringing communities together to celebrate the birth of Mahatma Gandhi and his legacy of peace, love, and respect for all people. Hawai‘i is the first state in the nation to recognize October 2nd as Mahatma Gandhi Day.
This year’s ceremony also recognized the historic sister-state partnership between Hawai‘i and Goa, India, which was finalized at a signing ceremony at Washington Place on O'ahu on Friday. The Goan delegation, led by Gurudas Pilarnekar, Director of Art and Culture, Goa State Government, has conducted multiple visits and engagements across the islands in various sectors like education, security, culture, agriculture, and more.
Photos are Available for Download Here
Rep. Tulsi Gabbard said: “Mahatma Gandhi’s legacy continues to inspire generations. Dr. Martin Luther King spoke about how much Mahatma Gandhi’s life and message inspired his own work for peace, justice and equality in America. Both Dr. King and Mahatma Gandhi shared the universal message of love and respect for all, regardless of their race, ethnicity or religion. Their leadership and example were critical for their time, and their universal message of love continues to be so necessary for our country and the world, as we are faced with ever deepening divides. May we continue to be inspired by them, and defeat bigotry and hatred with love and aloha.”
Background about Goa, India:
Follow Rep. Tulsi Gabbard on social media:
###
Posted by Common Ills at 12:26 PM