Friday, March 5, 2021.  Pope Francis has arrived in Iraq while, in the US, Joe Biden's bombing of Syria continues to be an issue.

History was made today as Pope Francis arrived in Iraq becoming the first ever pope to visit the country.  A greeting ceremony including music and dance.

Quite the welcome for Pope Francis in Iraq, the Pope clearly enjoying himself too #PopeInIraq
5:31 AM · Mar 5, 2021

Of the warm greeting and dancing provided to the Pope, Rasha al-Aqeedi Tweets:

Much respect to whoever organized this intro reflecting all of Iraq instead of one dominant identity. Beautiful to see and reminiscent of older, much better times.
6:05 AM · Mar 5, 2021

I liked the big smile for both Pope and Iraq PM 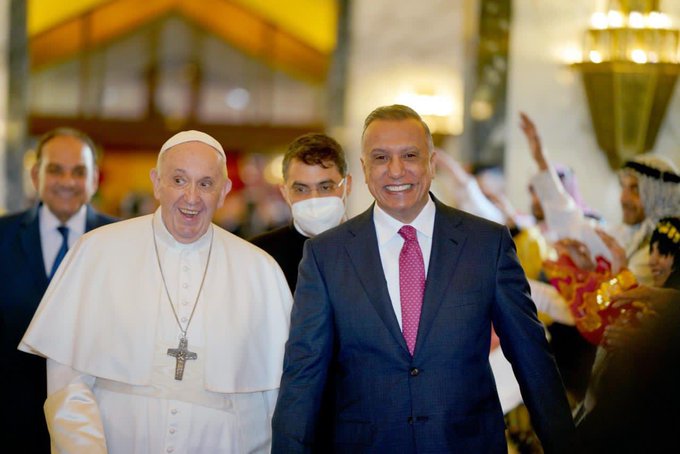 An Alitalia plane carrying him, his entourage, a security detail and about 75 journalists, touched down at Baghdad International Airport slightly ahead of schedule just before 2:00pm local time on Friday.

Iraq is deploying thousands of additional security personnel to protect the 84-year-old during his three-day visit, which comes after a spate of rocket and suicide bomb attacks raised fears for his safety.

Welcoming Pope Francis on the tarmac was a group of religious and political authorities representing the many different realities of Iraq's diverse make-up, as well as a group of Iraqi citizens and two children with a posy of flowers for the Holy Father.

On his flight Friday to Baghdad for a March 5-8 historic visit to Iraq, Pope Francis told journalists that this is an “emblematic” trip and that is also a “duty” to visit this “land martyred for so many years.”

His comments came as he greeted the 74 journalists from 13 nations flying with him from Rome to Baghdad, before proceeding to thank each reporter individually, always wearing a facemask and keeping a social distance due to the COVID-19 restrictions.

Both the pope and all those traveling with him on  the Alitalia flight AZ4000 were inoculated against the coronavirus ahead of the apostolic visit, the first in 15 months.

The pontiff has a busy schedule ahead: on Friday he’s meeting civil authorities at the presidential and the local religious community in the Syro-Catholic cathedral where 48 Catholics were martyred during Mass in 2010.

On Saturday he’s going to Najaf, a holy city for Shite Islam, where he will meet Grand Ayatollah Ali al-Sistani. Later that morning, he will lead an interreligious prayer in the ruins of the City of Ur, considered the birthplace of Abraham, father of believers. Lastly, on Saturday, he will become the first pope to celebrate Mass in the Chaldean Catholic rite.

On Sunday, last full day of his visit, he will focus his attention almost exclusively on the embattled Christian community, visiting the Nineveh Plain, including the cities of Qaraqosh and Mosul, decimated by ISIS, and celebrate Mass for 10,000 people in a stadium in Erbil, capital of the northern autonomous region of Kurdistan.

Security has been tightened for the papal visit.  Francesco Bongarra (ARAB NEWS) notes, "Iraq is deploying thousands of additional security personnel to protect Pope Francis during his four-day visit, which comes after a spate of rocket and suicide bomb attacks raised fears for the Catholic leader’s safety.A senior security official who has been briefed on the security plan said that forces involved had been trained to deal with worst-case scenarios, from street battles to bombings and rocket attacks."  Rasha al-Aqeedi reports on one threat made against the Pope:

Source from Baghdad: Unknown assailants leave threats on the walls of the Armenian Club in Karradah saying they will blow up the place and the Pope. Police have secured the area and viewed security cams to identify the mob.

Along with threats, there were announced cease-fires.  RUDAW reports:

The Iraqi militia group that last month fired rockets at Erbil announced a ceasefire during this weekend’s historic visit from Pope Francis.

Saraya Awlia al-Dam (Guardians of Blood) said in a statement published Thursday on Telegram channels affiliated with Iraq militia groups that they welcome the pope's visit and "will stop all types of military action during the visit of the pope of the Vatican out of respect for [Grand Ayatollah Ali] al-Sistani."

Elise Ann Allen of CRUX speaks with Australia's ABC Yvonne Yong about the visit and its significance.

Pope Francis' visit comes a week after US President Joe Biden bombed Syria for . . . the belief that Iran was behind some bombings in . . . Iraq.  Gary Leupp (COUNTERPUNCH) observes:

On 2/25 the U.S. under new President Biden launched missile strikes on a site in SYRIA (where the U.S. has troops illegally operating, still attempting to effect regime change) to kill IRAQIS to (as Secretary of “Defense” Lloyd Austin explains it) send a “message to IRAN” that it “can’t act with impunity.” That is: the U.S. will interpret the actions of any Shiites in the world against its own (real or imagined) interests as  “Iranian” acts of impunity against itself. It will continue to stupidly conflate Iraqi Shiites, Syrian Alewites, Yemeni Zaidis and Iranian Twelvers swallowing the (Wahhabist Sunni) Saudi propaganda about a threatening “Shiite crescent” from the Mediterranean to central Afghanistan.

U.S. news anchors and talking heads will continue to carelessly substitute “Iranian militia” for “Iraqi militia” not even noticing nor caring if they err. There is no law in this country of lies, in this season of lies, that prevents someone like CNN’s Richard Engel from constructing a story about Iranian provocation and leaving out all the points made above.

What, you thought the lies were over with Trump gone? You thought Biden was going to be a straight-shooter, and would— while handling the burning issue of structural racism in this country—also end a century and a half of imperialist aggression based on lies? You thought maybe the critic of racism and police murder would become the critic of imperialism, regime change, and the sort of racist essentializing applied the Iran and Arab Shiites?

Consider this: Gen. Austin thanked the Iraqi government for its cooperation in planning the attack to send the message to Iran. Never mind that Iran has actually since the U.S. election discouraged any actions against U.S. troops in Iraq. Never mind that the Iraqi government issued a denial of any consultations with the U.S. in the attack. (Pentagon press secretary Kirby had to acknowledge under questioning 2/26 that the Iraqis did not assist the U.S. with targeting.) Never mind that a force the Iraqis want out of their country killed an anti-ISIL Iraqi warrior helping the neighboring country of Syria rid itself of the hated ISIL. This is meant as a message to IRAN—to make it clear that the U.S. can act with impunity for the near term, anywhere it wants—under Biden just as it did under Trump.

Kelly Vlahos addresses the bombing and what it means with Matt Kibbe.

US Senator Tim Kaine's office issued the following this week:

WASHINGTON, D.C. – Today, U.S. Senators Tim Kaine (D-VA) and Todd Young (R-IN) reintroduced their bipartisan legislation to repeal the 1991 and 2002 Authorizations for Use of Military Force (AUMF) against Iraq. The bill would formally end the authorizations for the Gulf and Iraq wars – 30 and 19 years, respectively, after these AUMFs were first passed, reasserting Congress’ vital role in not only declaring wars, but in ending them. The repeal of these authorizations also recognizes the strong partnership the United States now has with a sovereign, democratic Iraq. The bill is also cosponsored by Senators Tammy Duckworth (D-IL), Mike Lee (R-UT), Chris Coons (D-DE), Chuck Grassley (R-IA), Dick Durbin (D-IL), and Rand Paul (R-KY).

“Last week’s airstrikes in Syria show that the Executive Branch, regardless of party, will continue to stretch its war powers,” Kaine said. “Congress has a responsibility to not only vote to authorize new military action, but to repeal old authorizations that are no longer necessary. The 1991 and 2002 AUMFs that underpinned the war against Iraq need to be taken off the books to prevent their future misuse. They serve no operational purpose, keep us on permanent war footing, and undermine the sovereignty of Iraq, a close partner. I call on Congress to promptly take up this measure and for the Biden Administration to support it to finally show the American people that the Article I and II branches can work together on these issues.”

“It has been thirty years since the first Gulf War began and nineteen years since the United States went back into Iraq. In the years since, Congress has been operating on autopilot when it comes to our essential duties to authorize the use of military force. The fact that authorities for both of these wars are still law today is illustrative of the bipartisan failure of Congress to perform its constitutionally-mandated oversight role,” Young said. “Today, Senator Tim Kaine and I have re-introduced our bipartisan legislation to continue our fight to repeal these outdated war authorities. Congress must not shy away from this debate and I look forward to working with my colleagues on the Senate Foreign Relations Committee to advance this important legislation.”

“One of Congress’s most solemn constitutional responsibilities is deciding when and how we choose to send America’s sons and daughters into danger overseas,” Duckworth said. “As a nation, we are long over-due to have a thorough and honest reckoning about responsibly exercising Congressional war powers, which includes repealing outdated authorities like the 1991 and 2002 AUMFs. For decades, administrations of both parties have kept these authorizations on the books to justify military action in the region without returning to Congress to make their best legal case for the need for such action. I’m proud to join this bipartisan resolution that would repeal these outdated war authorities and I hope we can work in a bipartisan way to address war powers.”

“Congress has a responsibility to not only declare war but also to bring conflicts to a close,” Lee said. “As demonstrated by presidents from both political parties, when authorizations for the use of military force (AUMF) remain on the books long past a conflict’s conclusion they become ripe for abuse, expanding far beyond congressional intent. Closing out U.S. authorizations for war in Iraq is long overdue, and Congress owes it to the men and women who sacrificed blood and treasure to declare victory and come home.”

“The airstrikes against Iranian-backed forces in Syria last week demonstrate the need to review and revise the way in which our leaders collectively choose whether or not to wage war. An initial yet important part of that process is removing unnecessary war-making resolutions that are still on the books,” Coons said. “I’m proud to join Senator Kaine in this bipartisan effort to repeal the 1991 and 2002 AUMFs, and I look forward to working with the Biden Administration and my colleagues on the Foreign Relations Committee to ensure Congress plays its rightful role in future decisions about the use of force.”

This bill is an effort to prevent the future misuse of the expired Gulf and Iraq War authorizations and strengthen Congressional oversight over war powers. For years, Kaine and Young have been leading voices in Congress raising concerns over the use of military force without congressional authorization.

Repealing these authorities will not impact ongoing U.S. operations to counter ISIS.

You can read the bill text here.