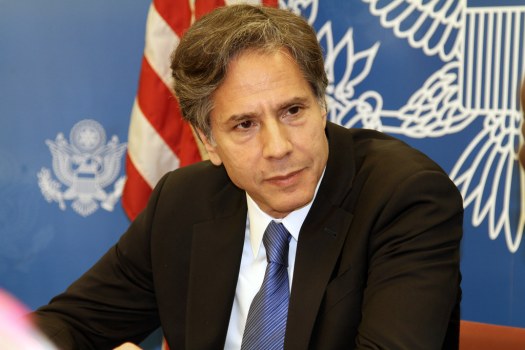 U.S. Secretary of State, and supporter of wars in Iraq, Libya, Syria, and Ukraine, a man who once backed dividing Iraq into three countries, proponent of not really ending endless wars, cofounder of revolving-door dealer in shameless profiteering from government connections for weapons companies WestExec Advisors, Antony Blinken made a speech on Wednesday that was quite a mixture, as many Rorschach tests are in U.S. politics. Those wanting to hear peace heard it, I’m sure. Those wanting to hear war did too, no doubt. Those trying to figure out what’s really going on heard both hints at peace and a firm commitment to wildly out of control militarism that guarantees a deadly diversion of resources and a significant risk of major war.

The speech was full of “national security” and “renew America’s strength” and insistent claims that only the United States can “lead” the world. But there were no threats, no bragging about the hundreds of billions in weapons deals with brutal foreign regimes already done, no promises to “kill their families,” and not even a God Blessing of the troops at the conclusion.

Blinken opened by suggesting that diplomats haven’t done a good enough job of connecting foreign policy to the interests of people in the United States. By the end of the speech it was still unclear to me whether he meant that different PR was needed or different substance. It was clear that he was not recommending that U.S. media or the U.S. public take a greater interest in the rest of the world because the rest of the world matters.

Blinken claimed that the Iran agreement prevented Iran from developing a nuclear weapon, which seems to suggest some lingering interest in not completely destroying any chance of rejoining that agreement, while simultaneously suggesting a completely false understanding of what was and is involved, a failure that renders rejoining the agreement extremely difficult. In reality, the agreement didn’t prevent Iran from doing anything it had any intention to do, but did prevent the U.S. government from starting a war. The bipartisan U.S. consensus to misunderstand this is reminiscent of the obligatory obliviousness to the Iranian trauma of 1951 that led to President Carter letting the Shah into the United States in 1979. Good Americans in 1979 knew that humanitarianism was good, loyalty to friends was good, Iran was a little meaningless country somewhere on the planet that should obey U.S. wishes for its own sake, major wars should be avoided if “possible,” and weapons sales to brutal kings and thugs should not be mentioned or thought about. They would have appreciated every word Blinken said on Wednesday and been as clueless that there was anything wrong with Blinken’s words as they were decades ago.

Blinken bragged that the Obama regime had brought the world together to address climate change. This suggests some interest in addressing climate change, as well as a willingness to blatantly lie about the U.S. history of sabotaging such agreements (and never mentioning the military’s exclusion from them). This matters not just because truth is nice, and in fact one of the four things Biden later seems to name as the “values” he has in mind every time he says “values,” but also because the allegedly unique ability of the U.S. government to bring the world’s governments together for the common good and for the U.S. good is Blinken’s chief justification for imposing U.S. desires on everybody else.

“The world doesn’t organize itself,” he said, never once mentioning the existence of the United Nations, the International Criminal Court against which he is imposing sanctions in perhaps the most lawless act currently underway in the world, or the very concept of a treaty (the U.S. being party to fewer major human rights treaties than all but one other country on earth).

Blinken warns that if the U.S. doesn’t “lead,” either some other country will or there will be chaos. He insists that the U.S. must “lead” to get its way, and that everybody else must “cooperate,” but the idea of cooperating on a fair basis through international institutions never gets a mention. In the next breath, Blinken promises that the United States will continue to have the world’s most powerful military, and explains that “diplomacy” depends on that.

Blinken then lists eight things he wants to do.

1) Deal with COVID. No mention of removing the profiteers and acting in the public interest. Plenty of promises to predict future pandemics, but not a single syllable about looking into the origins of this one.

2) Address economic crisis and inequality. Discussion of domestic issues not related to the State Department, plus a promise that future corporate trade agreements will be fair to workers. Who hasn’t heard that one before?

3) Blinken warns that according to Freedom House democracy is under threat. But he does not mention that the 50 most oppressive governments according to Freedom House include 48 that are armed, trained, and/or funded by the U.S. military. Blinken proposes that the U.S. itself become more democratic so that China and Russia can’t criticize it, and so that the United States can “defend democracy around the world in the years to come.” Oh hell. Look out, world.

Later Blinken gets around to suggesting that one can actually encourage democracy by example. This seems to have been almost an afterthought. But then he says this:

“We will incentivize democratic behavior, but we will not promote democracy through costly military interventions or by attempting to overthrow authoritarian regimes by force. We tried these tactics in the past. However well intentioned, they haven’t worked. They have given democracy promotion a bad name and they have lost the confidence of the American people. We will do things differently.”

This sounds really nice. But making promises after and while already breaking them is insulting to the people who are supposedly in charge of the U.S. “democracy.” We’ve got a broken promise on Afghanistan, a halfway and unclear broken promise on Yemen, no movement on shifting military spending to peaceful projects, a broken promise on the Iran agreement, weapons deals to brutal dictatorships including Egypt, continuing warmaking in Syria, Iraq, Iran, refusal to take troops out of Germany, backing for a would-be coup in Venezuela (with Blinken openly supporting overthrowing the Venezuelan government on the very same day as promising no more regime changes), nomination of numerous warmongers for high office, continued sanctions against the International Criminal Court, continued courting of the Saudi royal dictator, no prosecution of any pre-Biden war crimes, continued exemption for militarism from climate agreements, etc.

And always watch the adjectives, such as “costly.” Which military interventions does Blinken categorize as non-costly?

5) Work with allies and partners because they are military force multipliers (for the wars that won’t be waged).

6) Deal with the climate (or don’t) to which the 4% of people in the United States contribute 15% of the problem according to Blinken, who immediately declares that leading by example would do no good whatsoever in this case.

8) The Big China Challenge. Blinken names Russia, Iran, and North Korea as designated enemies, but says none of them compares to China as a threat to the U.S.-run “international” system. He conflates economic well-being with military aggression, which can’t be good.

After this catalog of interests and promises and platitudes, Blinken declares that the United States will never hesitate to use military force as last week in Syria — but only in accordance with U.S. values. A little bit later he gives some hint what those might be, naming four things: human rights, democracy, the rule of law, and truth. But wouldn’t it have been more truthful to have admitted that the UN Charter was violated by attacking Syria, an action the U.S. public never got to weigh in on, and that humans have the right not to be blown up?

I’m reminded of the U.S. elections of 2006. The exit polls in 2006 overwhelmingly showed the primary issues to be the war. This was the clearest single-issue national mandate an election and exit polls and pre-election polls had ever shown. The U.S. public had given the Democrats majorities in both houses of Congress in order to end the war on Iraq.

In January 2007 an article appeared in the Washington Post in which Rahm Emanuel explained that the Democrats would be continuing (in fact, escalating) the war they were elected to end in order to run “against it” in 2008, which is what Obama did. He “opposed” the war in rally speeches while telling reporters he’d keep it going.

All of this suggests that you can choose certain media for the befuddled masses and other media for the in-the-know elites, and you don’t have to actually keep any secrets. By October there was a bit of a glitch, though. Chris Matthews asked about the whole charade, and Rahm had to contort his BS a bit. Still, nobody really minded. Now Rahm is expected to join Blinken’s team as ambassador to China or Japan. I leave you with a haiku: