Wednesday, March 3, 2021.  Another rocket attack in Iraq while, in the US, Neera is out and not-so-proud.

Starting in the US with Neera down.  Yesterday, CNN reported that the White House would be withdrawing the nomination of Neera Tanden to head the OMB.

As noted above, the White House had claimed that they were going to "fight their guts out" for Neera.  So that's how Joe fights.  Strong words and then folds.

As for Neera, love Dana Bash's nonsense, "You have a lot of members of the United States Senate who are saying, 'C'mon, now you're going to get all upset and, you know, clutch our pearls about Tweets after we've had four years of a president who has been, you know, sending ad homenium Tweets and attacks against people?'"

Please, Dana, tell us the names of those US senators and then explain why, if it was necessary for you to repeat that nonsense, it's not necessary for you to note that Donald Trump's Tweets were treated as a big deal every day, day after day.  By the media, by Congress.  You couldn't get through a day without learning what Donald Trump had Tweeted.

It's really past time that the American press grew the hell up and stopped trying to engage in food fights.  It is also past time that the US Congress, which tried to impeach Donald Trump twice -- succeeded the first time but couldn't remove him from office -- stops trying to act as if the decency standard is what Donald did.  A person needs to have a much higher level of decency than Donald Trump.

Neera had no decency.  She got what she had coming.  She outed, to the entire workplace, a woman who came forward about on the job harassment.  That alone, as we said months ago, meant she shouldn't be overseeing any agency.  Add in that Neera fostered that toxic work environment.

Neera was never qualified.  She had no experience for OMB and she had no experience for leadership.  Her record was unsavory.  And that's before you get into the Tweets.  And let's not ignore the fact that she was also praising people who Tweeted even more awful things than she did.  Mr. Weeks, for example, who repeatedly Tweeted anti-Semitic Tweets and was embraced by Neera before and after.

Neera never should have been nominated.  She wasn't qualified and her image was of someone repugnant.  The notion that this person was qualified was always laughable.

Time and energy were wasted on her and her nonsense.  Maybe now she can read the writing on the wall and grasp that she better work hard to rehab her image if she ever wants to try again for a federal government job?

Otherwise, she can just remain the ugly troll of US politics, crawl back under her bridge and stay there.

Brett Wilkins (COMMON DREAMS) notes, "Tanden's left-wing critics pointed to her history of pushing cuts to Social Security, disparaging Medicare for All and other popular ideas, and proudly raising money from massive corporations—as well as what Sen. Bernie Sanders (I-Vt.) called her "vicious attacks" on progressives—as they welcomed news of her torpedoed nomination." 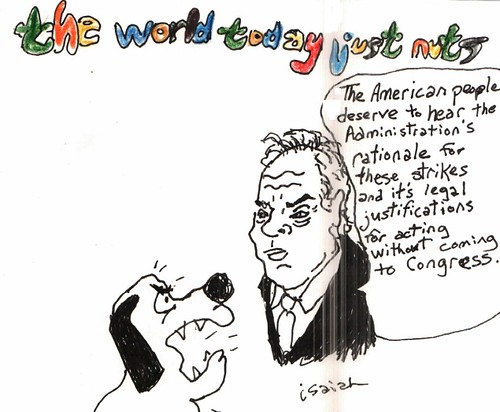 Senator Tim Kaine (D-VA) is planning a new push to repeal or revise congressional authorizations for the use of military force, an initiative sparked by President Biden’s Syria airstrikes.

Kaine said that this week he will likely introduce a bipartisan resolution to repeal the 2002 authorization for the use of military force (AUMF) that the Bush administration used to invade Iraq and the AUMF used for the Gulf War in 1991.

“Congress doesn’t repeal these things. We pass them and they’re just floating out there to be used — they can be used in mischievous ways to justify actions long after the original crisis has passed,” Kaine said on Tuesday.

How effective was that airstrike?  Dom Calicchio (FOX NEWS) reports, "An airbase in Iraq that hosts U.S., Iraqi and coalition troops was targeted Wednesday as multiple rockets struck the facility, a military spokesman in Iraq told Fox News."  Justine Coleman (THE HILL) adds, "The Iraqi military said in a statement that no significant losses were reported in the attack on the Ain al-Asad airbase in Iraq's Anbar province, but did not detail any potential casualties, according to news reports. Authorities tracked down the launch pad used to fire the rockets in the al-Baghdadi area of Anbar, an Iraqi military official told The Associated Press. "

The attack follows the publication Monday of Ghassan Charbel's interview with Iraq's Prime Minister Mustafa  al-Kadhimi entitled "Iraq PM to Asharq Al-Awsat: We Are Destined to Rid Ourselves of Foreign Hegemony"  (ASHARQ AL-AWSAT).  The inept British citizen has been hideous as a prime minister; however, his working for several Middle East outlets in the past has allowed his former co-workers to praise him in print and pretend that he's accomplished something while never disclosing their outlets' ties to Mustafa.

As the interview demonstrates, Mustafa remains incapable of answering a direct question.

Are you seeking a second term as prime minister? Why haven’t you stepped down as head of intelligence? Have the agencies discovered attempts against your life?

I was chosen to lead Iraq through a very specific transitional phase. I hope that I would succeed in this national mission during this critical time. I will in no way allow the results of the elections to impact this mission. My position allows me to oversee the armed forces. This does not contradict with my continued responsibility towards an important apparatus in its security agencies. What I am concerned about is motivating our agencies to be constantly vigilant in uncovering terrorist cells and forces that want to target the security of Iraq and its people.

Today, I am focused on leading the country towards safety and preventing it from sliding towards a dangerous position that would impact the security, unity and future of our people. My duty before our people and history is focused on protecting the state - today and in the future - against attempts to again put it at risk.

For those who are late to the party, protesters forced the resignation of the previous prime minister.  May 7th, Mustafa became prime minister.  The understanding was that he would hold office briefly and just to oversee early elections.  They are no longer so early.  When he finally announced them, they were set for this coming June.  Now they have been pushed back to October.  In the meantime, he has accomplished nothing.  Instead, he's wasted time attempting to set himself up for a second term.

THIS MUST END NOW! The
@iraqigovt
has failed time and time again to address the impunity with which protesters are being killed. When will the bloodshed end? #Nasiriyah #iraqprotests
10:55 AM · Feb 26, 2021

Mustafa has offered protesters hollow words while his forces continue to attack them.

During February, at least 190 people were killed, and 552 were wounded. Also, 33 victims were found in mass graves. Last month, 168 people were killed, and 295 were wounded; another 248 known victims were unearthed from mass graves or war rubble. Compared to January, the higher numbers appear to be the result of increased fatalities in the P.K.K. conflict in the north, and increased wounded in protests in the south.

Violence related to the Islamic State militancy left 13 civilians, 31 security personnel, and 55 militants dead. Another 16 civilians were wounded, along with 46 security personnel and one militant. Also, six convicts were hanged on terrorism charges.