Monday, April 29, 2019.  "I'm sorry" are hard words for Joe Biden, Seth Moulton makes a statement that's truly beneath a member of Congress, the Iraqi government demands that the US Embassy in Baghdad remove a FACEBOOK post, and much more.


This morning MEHR NEWS AGENCY reports, "Iraqi Foreign Ministry on Sunday said that it has summoned the charge d'affaires of the US embassy in Baghdad over comments on social media considered offensive to the diplomatic norms."  What are they talking about?  As noted in Saturday's "Moqtada floats closing the US Embassy, the Iraqi government demands the US delete a FACEBOOK post."


So that's one problem for the US government.  Here's another -- this is from the US Embassy in Baghdad's FACEBOOK page:

As ALSUMARIA notes, the Iraqi government sees that post as interfering in Iraqi affairs and they says it goes too far.  They are calling for the US Embassy to remove the post.

Better question, why is it that the US media is ignoring this?  Normally, when the US and another government clash, it's news.  Does no one in the US media pay attention to Iraq anymore?  Or are they all desperate to save the US government any embarrassment by ignoring this story?


By the way, why are they summoning the US charge d'affaires?  Because the US has no Ambassador to Iraq currently.  B-b-but, Douglas Silliman!  Douglas Silliman left Baghdad months ago.

U.S. Embassy BaghdadVerified account @USEmbBaghdad
@USAmbIraq: "It has been my honor and privilege to serve as the American Ambassador to Iraq...I want all Iraqis to know that I see great potential for a truly democratic, sovereign, independent, and prosperous Iraq. Fi 'aman Allah" …
13 replies24 retweets88 likes

Joey Hood is the US charge dd'affaires.  Who is Joey Hood?  From the US State Dept: 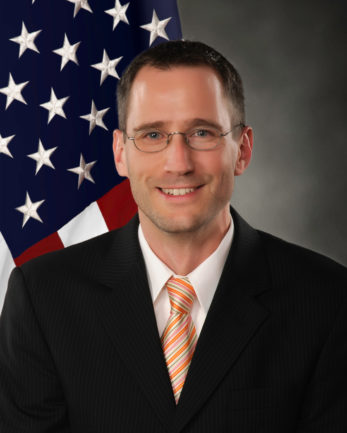 Joey Hood is the Chargé d’affaires of the U.S. Mission in Iraq.  Mr. Hood has spent much of his career working in the Middle East, and particularly on the Arabian Peninsula. Prior to assuming his duties in Baghdad, Mr. Hood was Deputy Chief of Mission in Kuwait, which followed an assignment as Consul General and Principal Officer in Dhahran, Saudi Arabia.  Previously, Mr. Hood was Acting Director of the Office of Iranian Affairs at the State Department in Washington, DC.
Mr. Hood has also served in Riyadh, where he coordinated U.S.-Saudi military cooperation, and in Asmara, where he was a liaison to rebel leaders from Sudan’s Darfur region.  He has also been assigned to U.S. embassies in Yemen and Qatar.
Prior to the Foreign Service, Mr. Hood was a Fulbright scholar in Burkina Faso and worked at a bank in Vermont.  He earned a Master’s degree from the Fletcher School at Tufts University and a Bachelor’s degree from Dartmouth College.

Why hasn't President Donald Trump nominated a new ambassador?  In November, Donald nominated Matthew Tueller.  The Senate then proceeded to drag its collective feet.  At the start of this month, they finally held confirmation hearings.  And then?  Nothing.  No up or down vote.  Again, Douglas Silliman left Iraq on January 31st.

Is he qualified?  If he's not, vote no and be done with him.  If he is qualified, vote yes so that there's an ambassador to Iraq.  Democrats liked him enough when then-Secretary of State John Kerry championed him to be Ambassador to Yemen (the post he still holds currently) back in 2014.  Equally true, a sitting ambassador is generally a sure-thing vote wise when proposed to be an ambassador to another country.  Why the hold up?

When in the US Senate, Joe Biden never had a problem voting.  He voted for every war you could think of -- including the Iraq War.  Thursday, he announced his intent to run for the Democratic Party's presidential nomination via a lackluster video.  Four days later, he finally makes his first campaign stop.  He'll be in Pittsburg today.  Four days later?  Remember that the former vice president turns 77 in November.

That's a lot of years and he has a long history that goes with them.


Last Friday, Joe appeared on ABC's THE VIEW where he was given a chance to apologize to Anita Hill -- something he still has not done.

"I think what [Anita Hill] wants you to say is 'I'm sorry for the way I treated you' not 'for the way you were treated." -@JoyVBehar "Well, I'm sorry the way she got treated. If you go back and look at what I did and didn't say, I don't think I treated her badly." -@JoeBiden


Despite gentle prompting from a supportive Joy Behar, Joe refused to issue an apology.


Art Markman has a column entitled "Why Men Like Joe Biden Find It So Difficult To Apologize."  One rival for the Democratic Party's presidential nomination says Joe owes Anita an apology.  AP reports:

Massachusetts Congressman Seth Moulton says the former vice president should apologize for the way Hill was treated during confirmation hearings for Supreme Court Justice Clarence Thomas. Moulton said Hill “was treated terribly” when she testified to Biden’s committee in 1991 that Thomas had sexually harassed her. Moulton added: “I think he should apologize.”
Biden said on NBC he was sorry “for the way she got treated” but added that, “I don’t think I treated her badly.”


Seth's putting his foot in his mouth a lot lately.  Is he trying to be the new Joe Biden?  Seth felt the need to declare that Donald Trump was not a patriot.  It's the sort of garbage you expect to hear from blowhards in front of a radio microphone, not from members of Congress.  The statement is beneath him and if anyone doubts where that kind of garbage leads . . .

@senategop @senatedems @housedemocrats @realdonaldtrump is NOT a patriot he dodged going into the war by a fake foot/ankle issue a lie. he is the worst person. And he proves it everyday Rep Seth Moulton, an Iraq War veteran,Trump 'is not a patriot' :
0 replies0 retweets0 likes


What an ugly statement from such an ugly person.

On her Twitter feed, the ugly woman claims she believes in decency and civility.  After she's declared someone else not to be a patriot?  And after she's slammed someone for not going to Vietnam.

Does the bitch know that Bruce Springsteen didn't go to Vietnam?

I don't think less of Bruce for that.  I'm grateful for everyone who didn't go over.  Kim Carvente is just an ugly woman with a butt ugly face and even uglier way of thinking.

When Seth makes his stupid comment, that's where it ends up -- with aged hags like Kim Carvente slamming people for whether or not they went to Vietnam.  That's not the test of patriotism, sorry.  Participating in illegal wars does not make you a patriot.  Hags like Kim, of course, never fought in combat.  But for hags like Kim, that's the way to judge patriotism.

Kat's "Kat's Korner: Rhiannon Giddens proves THERE IS NO OTHER" went up Sunday night.  New content at THIRD: