A large US military convoy reportedly left the Syrian town of Ayn Issa in the northern countryside of Al-Raqqa on Friday.
According to reports, the US military convoy made its way to the Iraqi border, where they were later mentioned to have deployed to a nearby base.


No, the Iraq War never ends.  It especially will never end if the US government continues to define defeating the Islamic State as its role and not the role of the Iraqi government.  ISIS has not been defeated, it has not been vanquished.  Today, XINHUA reports:

Iraqi security forces on Saturday killed two would-be suicide bombers affiliated with the Islamic State (IS) militant group and captured two IS militants in an operation in Iraq's western province of Anbar, the Iraqi military said.
The troops, backed by Iraqi gunships and international coalition aircraft, conducted a search operation in the west of the provincial capital Ramadi, some 110 km west of Baghdad, Anbar Operations Command said in a statement.


Loaa Adel (IRAQI NEWS) adds, "A security source informed that four members of Al-Hashd Al-Shaabi were injured on Saturday. The fighters were injured while thwarting an attack by the Islamic State group in Khanaqin District, Alsumaria News reported."  Again, ISIS remains in Iraq.

The US was friends with Ireland but never defined the IRA as a target for war or insisted that Ireland needed the US to defeat IRA.  Somehow, ISIS is supposed to be different.

In other violence, Mohammed Ebraheem (IRAQI NEWS) notes, "Two Iraqi policemen, including an officer, were wounded on Saturday in a bomb blast in Diyala province, a security source was quoted as saying."


Protesters took to the streets of Iraq’s southern city of Basra on Friday to demand greater regional autonomy from Iraq’s central government.

“We want to rebuild Basra, and we are not going to take over the oil, it’s the wealth of all Iraqis. We assure you that we are not having that ugly segregated behaviour, don’t try us because we are going through the process of setting up a provincial government despite the consequences,” he added.

Amid mass protests against federal government policies and neglect, Basra’s Provincial Council recently voted to hold a referendum on making Basra an autonomous region, much like the Kurdistan Region.

Ranj Alaaldin‏Verified account @RanjAlaaldin Apr 12
Ranj Alaaldin Retweeted Mustafa Habib
Not to be dismissed. A potential scene setter for what could be around the corner this summer when mass protests are likely to unfold & destabilise the country once again. It is no secret that the new Basra “czar”, Hadi al-Ameri, is a long-standing proponent of regionalisation.
Ranj Alaaldin added, 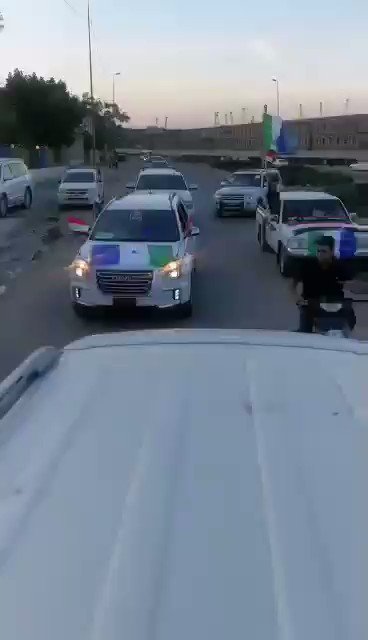 0:45
Mustafa Habib @Mustafa_Habib33
Breaking: Footage show hundreds of #Basra residents are demands to form "Basra Federal Region" and raise flag of the new region over their cars in the streets of Basra
Show this thread
0 replies1 retweet3 likes

Polls in Iraq indicate people worry they can’t trust anyone and they say the government is corrupt. Experts in Washington said that could lead to another opportunity for an extremist stronghold in Iraq.
“This is one of the most worrying issues in Iraq for me — the distrust in others,” said Munqith Dagher, CEO of the Independent Institute for Administration and Civil Society Studies in Baghdad. “Right now, no one trusts no one.”
The latest poll stated that 11% of Iraqi respondents said they could trust other Iraqis, down from 40% in 2013 before the attempted takeover by the Islamic State (ISIS).

Also in the 2019 survey, 93% of polled Iraqis said corruption has spread. In addition, 33% of respondents said they trust the prime minister, 29% expressed trust in the president and 17% said they trust the judicial system. Fewer than 20% of those asked said they believe Iraq has a democratic system.

Moving to another topic, we've been noting the flooding for some time now.  Pam Wright (THE WEATHER CHANNEL) reports:

After weeks of heavy rains, historic water levels at Iraq's reservoirs are threatening dams, prompting the evacuation of thousands.
The heavy rain and melting snowcaps from Turkey and Iran have nearly overtopped Iraq's four main reservoirs, while the Tigris and Euphrates rivers continue to rise.

Residents near the Dukan dam in the northeast were told to leave their homes as water levels reached heights not seen since 1988.