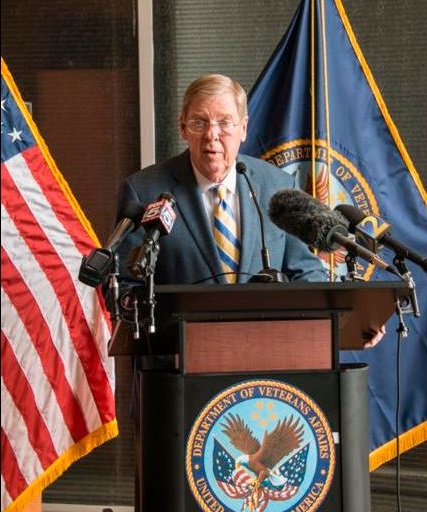 Senator Johnny Iskason (above) is the Chair of the Senate Veterans Affairs Committee.  His office issued the following earlier today:

“I am glad to see Mr. Byrne nominated to serve in this critical role,” said Isakson. “The deputy secretary of the VA is responsible for working closely with the secretary to make sure the federal government’s second-largest cabinet department is operating effectively, efficiently and in the best interest of our veterans. I look forward to chairing Mr. Byrne’s confirmation hearing in the coming weeks.”

The deputy secretary is the VA’s chief operating officer responsible for working in tandem with the secretary to oversee the VA’s nationwide system of health care services, benefits programs and national cemeteries for America’s veterans and their dependents.

Prior to joining the VA, Byrne served in Lockheed Martin Corp.’s legal department as the chief privacy officer and lead attorney for information technology, cyber security and counterintelligence. Byrne has more than 20 years of experience in the public sector, including service as a deployed Marine infantry officer and a U.S. Department of Justice international narcotics prosecutor. Byrne is a distinguished graduate of the U.S. Naval Academy, where he received an engineering degree and ultimately held the top leadership position of brigade commander.
The Senate Committee on Veterans’ Affairs will hold a hearing on Byrne’s nomination after his nomination paperwork has been completed and submitted to the committee.

The Senate Committee on Veterans’ Affairs is chaired by U.S. Senator Johnny Isakson, R-Ga., in the 116th Congress. Isakson is a veteran himself – having served in the Georgia Air National Guard from 1966-1972 – and has been a member of the Senate Committee on Veterans’ Affairs since he joined the Senate in 2005. Isakson’s home state of Georgia is home to more than a dozen military installations representing each branch of the armed services as well as nearly 700,000 veterans.