photographs from the archives - coachella's palmeros - 1992

Award winning photo journalist David Bacon has a new photo essay.  This is the opening.

PHOTOGRAPHS FROM THE ARCHIVES - COACHELLA'S PALMEROS - 1992Photoessay by David Baconhttps://davidbaconrealitycheck.blogspot.com/2019/04/photographs-from-archives-coachellas.html 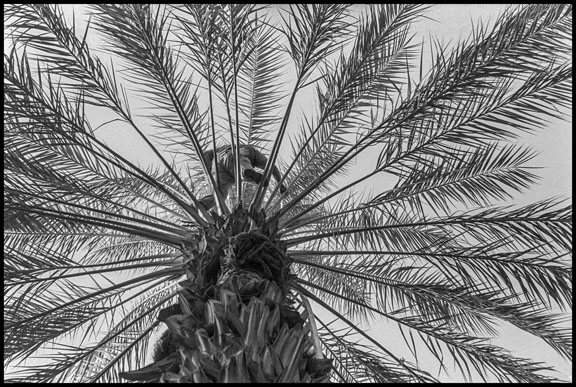 Photographs from the Archives are occasional photoessays, based on images from David Bacon's film archive of photographs taken between approximately 1988 and 2005.I saw my first immigration raid long before I became a photographer. I was an organizer for the United Farm Workers in the Coachella Valley. One morning I drove out to a grove of date palms to talk with the palmeros working high in the trees. As I pulled my old white Valiant (the only kind of car the union had) down a row between the palms, I saw a green Border Patrol van. The workers I'd talked with the night be- fore in the union hall were all staring at the ground, handcuffed behind their backs.I felt helpless to stop the inexorable process in which they were loaded into the van. I chased it to the holding center in El Centro, two hour's drive south, but then stood outside the barbed wire, wondering what I could do to help the families left behind. It was one of the watershed experiences?of a lifetime.There were other immigration raids during the time I worked for the UFW, often and by no coincidence during the times workers were organizing. It was easy to see how detentions and deportations are not just violations of human rights, and cause devastating pain for families, but are a weapon in a war to keep immigrants from organizing.I carry my camera as a tool to help stop this abuse, and to take photographs that will help people organize. Part of the effort is to give personality and presence to the people involved.  When I began working as a photographer I thought right away about going to the Coachella Valley and taking photographs of the communities where I'd worked as an organizer.  I thought especially about the palmeros, not just because of that raid, but because the work they do requires such skill and courage.

And here is a list of David's exhibits and books:

Exhibition Schedule
Exhibitions of photographs are scheduled for the following venues and dates: